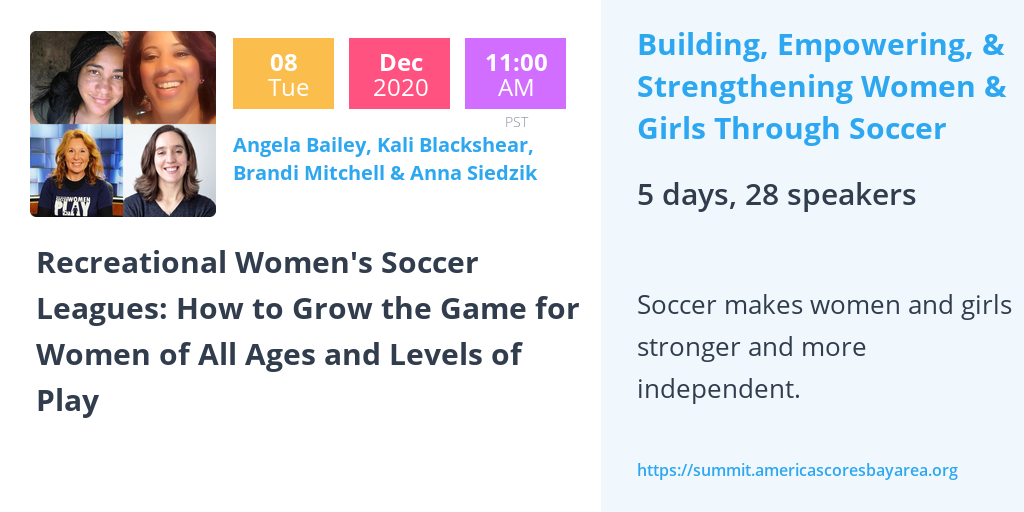 Join us at the December 2020 America SCORES Bay Area #SoccerSummit to discuss Women’s Recreational Soccer Leagues! You can register for access to the live “Recreational Women’s Soccer Leagues” session at 11am on December 8th, and access the replays at your convenience!

Take a look at the list of speakers scheduled for December 4th and December 7th to 11th, 2020 and learn more about their event: “Building, Empowering, & Strengthening Women & Girls Through Soccer.”

America SCORES Bay Area knows that the Beautiful Game provides great health benefits for women and girls but it also provides a variety of other advantageous attributes including building strong independent leaders, establishing more social interaction for improving collaboration and connectivity, increasing self-esteem and confidence on and off the pitch, plus much much more!

Our diverse group of incredible speakers from the soccer community will be sharing their experiences and knowledge on a multitude of topics that pertain to the betterment and growth of women and girls through soccer!

* Where to Watch the Women’s World Cup in San Diego*

Published on SanDiegoSoccerWomen.com. June 06, 2019. FIFA Women’s World Cup 2019 is being held in France and televised and streamed around the world. CBS Sports: The tournament will air in the United States English on Fox and FS1, while the Spanish broadcast rights are with Telemundo, with games also airing on Universo. You can watch the tournament on fuboTV (Try for free). /  Wikipedia: In March 2015, FIFA awarded France the right to host the 2019 FIFA Women’s World Cup over South Korea.  The tournament will begin on 7 June 2019 and the final will be played on 7 July 2019;[17] the final match will be played at Parc Olympique Lyonnais, a venue with a capacity of 58,000 in the Lyon suburb of Décines. / Matches will also be played in La Havre, Nice, Paris, Rennes, Reims, Grenoble, Valenciennes and Montpellier.